Photographs and questions. Coming in over Trivandrum, I realise that there are far more 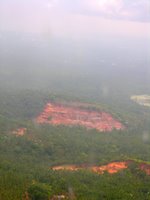 coconut trees in the world that I had thought possible, and 87.32% of them are right here below me. 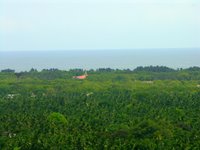 Palm-fronds stretch from the sea to the eastern horizon. If I stepped out of the plane in mid-air, I might be able to walk across Trivandrum on the tops of these palms, a Brobdingnagian lawn springy between the toes.

A red gash amidst the green. What is quarried here? Rocks? Gravel? Just the red earth itself?

Monday morning I walked to the sea. Down Radhakrishna Salai to the crossing with Kamarajar Marg. Along the way, more weird glass fronts than a protest mob could throw stones at (ooohhh the lovely music of breaking panes). Obviously this is not the right part of town for heritage buildings. One forlorn house with louvred windows (is this why Cal reminds some people of Madras?) cowered in a corner of a school 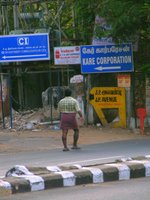 compound. A large energetic gent in a mundu and check shirt bustled past in a super-walk, occasionally jumping in the air and pumping a fist.

A trim 70-ish gent with Col. Blimp moustaches asked me why I was taking pictures. I resisted the urge to go “Sir, sorry sir” and drawled “Oh, it’s a survey of public urination commissioned by the World Bank.” He was not amused. Afterwards, I felt sorry. But by then he was long gone.

In Chennai, there are no peremptory signs that say “No parking here”. Instead, the signs read “Please do not park in front of this gate”. Such courtesy is charming. I could like this place. One sign on a government building (naturally) warns “Trespasser will be prosecuted”. They know who you are, son, don’t try it again. (One has this mental picture of their waking up to rude graffiti on the front door … the Trespasser strikes again!) 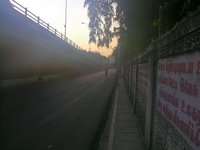 Under the fly-over, past the TTK office, the TTK auditorium, more offices, crossings where the traffic lights change for their own pleasure because nobody pays them any heed at six in the morning, the road is wide, clean*. It’s nowhere near as muggy as I’d expected, there’s a fitful breeze off the sea. A sprightly old man in a spotless white shirt and mundu marches in front of me. His pleasantly dumpy wife trundles along behind her lord and master, swathed in a silk sari (at this hour?); they both have sandal-paste lines on their foreheads. When they reach the next crossing, L&M solicitously waits for his wife to catch up, then takes her hand and hurries her across the road. Softie! (I like.)

Every hundred yards or so I have to hold my breath and speed up to get away from the stench of urine. Not a random pee, but specific points where the pavement is pitted from ammoniacal attacks. With the heat and the humidity fermenting the stuff, it’s like a chlorine attack. Not a single public toilet in sight. Why can’t Sulabh get their act together in this city?

But there are also the smells of incense and of jasmine flowers. A girl emerges from a side road in a chic top and denim skirt; very hip, but her hair is loose and down to her waist and is adorned with a huge bunch of flowers. I sniff appreciatively as she crosses my path. A few steps down, a man is selling 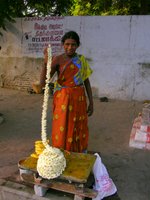 green coconuts off a barrow. The scent of a bunch of incense sticks reminds me of childhood and grandmothers. A small shrine takes up the entire pavement at one point. Beside it, more green coconuts and a lady selling flowers. And bananas. A weird combination until you take the shrine into account. Then it fits. I dig out the loose change in my pocket. Using sign language, I get a two-foot length of threaded flowers. Lovely. Lacking hair, I wind it round the strap of my camera bag. Now it’ll smell good for the rest of the day. 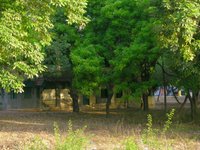 Right at the corner, a large walled estate with a few decrepit buildings. Only the government can so under-utilise prime property. Across the road, some kind of para-military headquarters (no signage), a squad lined up in front of the steps in khaki shorts and sweat-damp vests, an officer or instructor bellowing incomprehensible commands in the manner of uniformed drill anywhere in the world. “AAAAarrrhhhh baaarrrrhhh HROOO HRUP!!” Translation – my piles are killing me so I’ll be damned if I’ll give YOU lot any joy!

The beach is … flat. 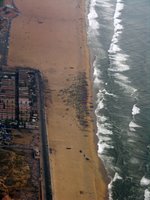 No sand dunes to mark high tide. Hardly any noise of breakers. No sea-tang in 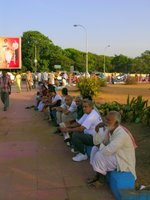 the air. There’s an orderly crowd half-way between the road and the water-line. A passing policeman, his little finger delicately linked with a friend’s, informs me that it’s “yo-u-gaH, sairrrr”. But they seem to be waving and bowing rather than doing any yogasana I know. Morning walkers hunker down on the sidewalk. Obviously the morning chat is as important as the exercise. Out in the sticks, the morning dump provides both exercise (since nobody will dump in the vicinity of their own home) and social interaction. In the cities, the ritual remains but the dump has been eliminated. Sanitised version.

On the way back I stopped for a kaapi at a hole-in-the-wall. Right next to another glass-front (blue on brown. Jesus wept!), the Hotel Manhattan. Complete with the “Brooklyn Coffee Bar and Diner”. Next door, four men sat on newspapers spread across the pavement. They weren’t playing cards or even talking, just sitting there watching the morning. Or perhaps they were waiting for somebody. I got good coffee, service with a smile and free advice on whether to take an auto back to the hotel (now that the sun is up). Come to think of it, everybody who’s been of service to me in Chennai has smiled. Wide, brilliant smiles. I’m beginning to like Chennai.

* - About the clean roads … (from a conversation on the flight home). Chennai could be blessed because its infrastructure is not overloaded with free riders. The rural economy has grown not only in Tamil Nadu but also in two of the three neighbouring states. The third has its own metropolis which is closer for the rural refugee. Ergo, there are fewer families trickling into Chennai in search of a living, hardly any shanty-dwellers or free riders. The paradox is that Chennai still has a fairly low CPI. Has anybody done a study of the effect of cheap labour on the Consumer Price Index in these parts? Or vice versa? What’s the real estate growth? I should check.

Ah, he's had a change of heart. Or is at least willing to reconsider. What we would do to see a row of closely knitted jasmines sitting on your head.

Oh! Our man from Calcutta softens towards Madras and the South in general?

I like the image Ph leaves me with. Nice Bengali man with non-watery whiskey in hand - and balancing a string of jasmine flowers on head.

Btw - You tried Chettinad food yet?

Awwww, JAP - you like my hometown! I feel as proud as a Mama whose usually weird kid did something unexpectedly wonderful...

Great post, btw. Thanks for the pics. It's been too long since I've been home.

Out in the sticks, the morning dump provides both exercise (since nobody will dump in the vicinity of their own home) and social interaction

Who knew the humble dump blesses us in more ways than one!

Ph, Neha, KM - you guys have a long wait ahead!

Chenthil - maybe we should synchronise our walks the next time I'm in your town. Liked your blogs.

Madras thanks you kindly sir.

One of the very few blogs that does not have daggers out the moment the word "Madras" comes in.

The ramblings of a shoe fiend said...